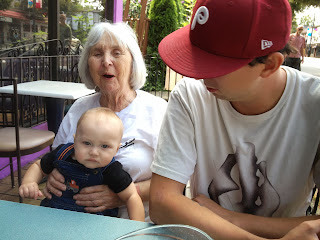 I had a surprise all planned for Jonny's birthday... a nice hotel on the water in Seattle and dinner at the Crab Pot with Carrie and Derek. Life made us late. The border line was the worst. The boy should have been napping and he was until we stopped in the line. Then he woke up and screamed off on and for two hours while we sat in the slow lane. The lane that did not diverge into four different border lines like its neighbour. The line that went through one single line and sat frustratingly watching the cars in the next line zoom past to freedom.

Not to whine - but what a line! That wasn't it either. There was traffic outside of the outlets and through Everett and for no apparent reason.

Carrie and Derek happily waited for us at the Edgewater and enjoyed happy hour. 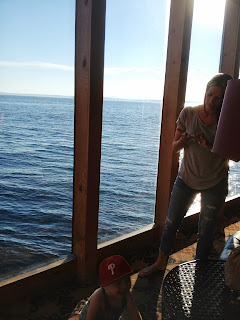 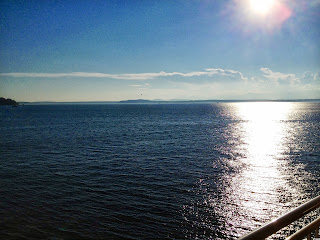 The Edgewater had a beautiful view but we did not get to experience much of it. We would not go back to this hotel. The room was too expensive and the valet... well.. he is lucky I didn't hit him... but who wants to pay $40 to park and not be able to get the stuff in their car? I felt like we were shuffled out of our car so fast.. and we were... and we forgot to bring up important stuff... like the boy's bed.

But... the boy didn't even really end up needing his bed.. because he didn't really sleep in it.. or at all! Ugh! 5:30am we finally reached our limit and hit the road. I missed out on my run with Carrie along the Seattle Seawall... and we just packed up and erased that place. 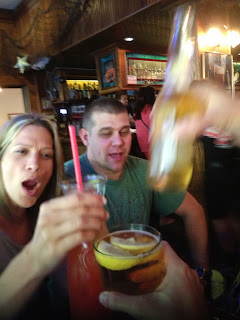 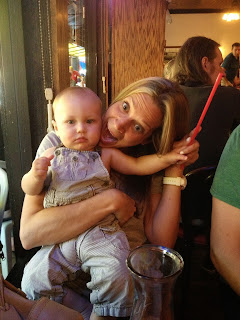 Now, this isn't to say that the Crab Pot wasn't awesome. The boy was really well behaved. He sat in a high chair for the first time and ate bits of potato, corn, and bread. Carrie took him around for a while and then I did. It was awesome. We came, we devoured like neanderthals, and then we walked back to the hotel dreaming of living on the fancy ass boats in the harbour. 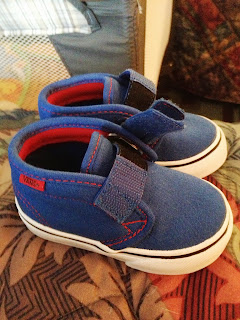 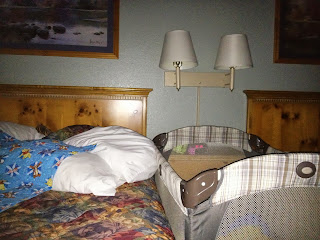 Today we drove until the boy got antsy and then we stopped and I made a parking lot tent set up at some outlet stores. Then we walked around and got the boy some shoes. When he seemed tired again we got back in the car and he slept until Creswell, which is right outside of Eugene. We all had a nap and then the boy and I went for a swim. We had some Chinese food. And now we are trying to get the boy to sleep. Please sleep!

What will tomorrow bring? Where will we end up? I guess you will have to check back tomorrow!