May 22, 2013
My birthday started on Wednesday when we were still in Vancouver. Jonny, Christian, and I went for a walk and chill. Jonathon got his hairs trimmed up and we sat at a couple of different city spots and enjoyed the different flavours and views. Somewhere along our travels we lost Sophie the giraffe and wish her well in her new life. I envision her with a cute little puppy squeaking happily. Christian's new favourite things to put in his mouth are water bottles....

At one of our chill spots Jonny gave me my birthday presents... I scored! I also won ten bucks on crossword scratch and wins. It was a great day that started with swimming and ended with beers with G in Gastown. None of it was planned it just was one of those nice sunny I am leaving for Vegas on my birthday tomorrow days.

The next morning came too soon. A hang over is never fun and it is even less fun with a baby that wakes up and is ready to go and is smiling at you and gloating at how good he feels. Against not all odds but bad headaches, evil thirst, and sleepy retardedness... we made it to Vegas.

We were worried about how Christian would be on the plane. He was amazing. His first flight from Vancouver to Portland he had a cranky moment during take off but once we got his bottle into him he fell asleep. In Portland we changed his diaper. The flight from Portland to Las Vegas he ate another bottle and fell asleep. He woke up about half way through with a poopy diaper. I changed him in the bathroom and then we had to wait for the drink service to be completed before we could get back to our seat. This was great because we got to stand and bounce and make faces in the mirror at the back.

The first room that they gave us at The Tuscany was in D building and it had two beds so we went back to the front desk and requested a king bed in one of the buildings close to the pool. They didn't have one close to the pool that night but they reserved one for us for the next night. We were moved to L building with a king bed. This building was not as nice as the other two we had previously been in. (A on our first trip and D with the two beds). After our morning walk and some chills by the pool we moved into our new room in H building. They sent a crib and microwave over. It was much better!

A side note about the microwave... when we got there Thursday night we bought burritos from 711. (711 imitation Da Bombs) Exhausted and hungry with the boy asleep in his stroller waiting for his crib we realized that we didn't have a microwave in our room. We were too tired to deal with the situation so we all just went to sleep once the crib arrived.

Our first morning we woke up early and went out for a walk. We went to Ellis island for breakfast and Jonny's first steak and eggs ($5.99). Jonny took pictures of skate spots and wondered why people weren't skating them. Do they get big fines? Is it too hot? Are there too many security guards? What's the deal?

It was still early enough - cool and shady enough to go for a swim with the boy when we got back to the hotel.

After our swim we went to the front desk to get our new room keys but we had to wait for the room to be cleaned. We went and got some food and beers on the patio. We chilled on this patio each day to stay out of the sun and heat.

I found out that one of my students, Matt Wong, was in a battle in Las Vegas so I had to go and check it out. It was at a District Dance studio on East Tropicana street by the Libarace museum. Hmmm... Unfortunately, we missed Matt.

Saturday morning the boy slept in so we didn't get much of a morning walk in. After our breakfast at Ellis Island and Jonny's third steak, we decided to head over to the Fashion Mall and get our anniversary hats. I didn't bring a hat so we really needed to get one to get the sun out of my eyes and cover up my raggin' muffin hair! We walked along the block before the strip and tried to stay in the shade. It was sunny from the start today - not overcast like Friday morning. We walked around the mall enjoying the air conditioning. We got our hats and found a new outfit for the boy. We each got a treat and then head back to our hotel for a cool nap.

After the mall we needed to get some forms (formula) for the boy. We stopped at the Walgreen's and had a chill with some Corronitas. (Mini Corronas!)

After nap time we went back to our chill spot on the patio. We had some beers and the Mexican sampler. This time we amped up chill time by taking turns going to the casino to play the penny slots. At 5:30 there was enough shade on the pool to go swimming. Then we showered and headed to Old Vegas to see Matt at the Red Bull BC One Cipher. But... we didn't see him... again! I would have really liked to get a picture with Matt in Vegas. It would have been funny.

The next morning, Sunday, the boy slept in again. We decided to get our buts to Ross on the strip before it got hotter and then get breakfast on the way back somewhere to cool down. Ross was awesome and we each scored some treats. We had breakfast at the Harley Davidson place on the patio and it was pretty windy. I through out my old duct taped Vans and put on my new Osirises that I got from Ross for $30. We got back to the hotel and had nap time then chilled on our own patio. We played the penny slots again but lost interest after one turn each. I just don't get it. We had our evening swim and then decided to try and make it to some of the free shows.

Jonny and I planned out an evening of free events for Sunday night. The first one we tried to go to was at Caesar's Palace. That place is huge. We didn't make it in time. Ok, scratch that. Let's hit the next one at Treasure Island at 8:30. We got there and we were standing in a big crown of people and we couldn't really see. No fun. Scratch that. Let's head across the street to our Walgreen chill spot and watch from a distance. It is no fun trying to get around Vegas with a stroller in crowds of people. Next time we will go early and get a place at a restaurant where we can see the shows and chill.... not in a crowd! When the boy is older and cares... 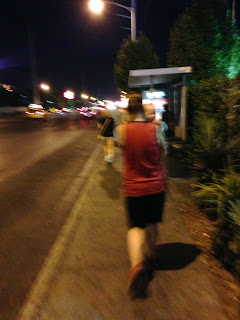 Monday morning we got to have one more swim, a breakfast at Ellis Island (Jonny steak count 4? 5?), and a chill. We got a Town Car to the Airport. We got dropped off at Alaska Airlines but had to take the bus to American Airlines. Our flight left really late leaving us no time to eat and replenish our fluids in LA like we planned. (The steward gave us Mac and Cheese on the plane for free!) The boy was fussy on the first flight from Vegas to LA but he slept the whole way on the flight from LA to Vancouver. Sky Train. Home. SLEEP! Jonny had a bad case of the last day blues but we all made it home safe and sound and even though we were tired - refreshed with new happy memories. 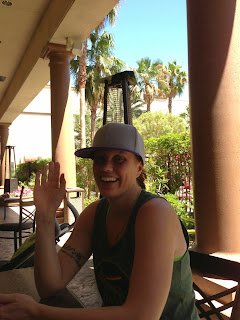 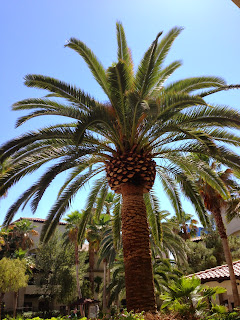 One of the "things" we are going to start with the boy is collecting a patch or a pin to attach to Aunty Mary's map quilt every time we travel somewhere new (Pit's idea). I couldn't find one in Vegas so I sewed on a guitar bottle opener. (Also used to open Corronitas!) We need to get a patch from Seaside next time we go. Maybe in August on our way home from California :-) 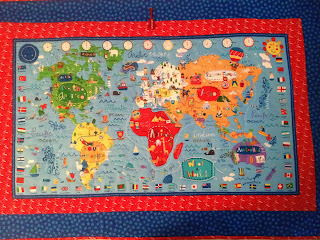